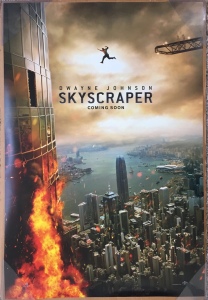 The movie box office results are in for this weekend and I am quite surprised to learn that the new Dwayne Johnson action movie Skyscraper landed with a thud.

It finished not second but third, behind Hotel Transylvania 3: Summer Vacation and the second weekend of Ant-Man and the Wasp. Skyscraper opened with a lousy $9.3 million and finishing with $25 million domestically. It did do better overseas with a haul of $40 million, but it isn’t like that is such a great showing either.

You have to ask what the hell happened? This movie seemed to be well-promoted ( during the Super Bowl, no less) and Johnson himself is a big action star. But maybe that latter fact is the real problem. Johnson is starting to get a well-earned reputation for appearing in schlock movies (Baywatch being one of them last year), and that might be what is driving people away.

The other thing I notice is that this movie seems suited to another era like the 80s or 90s when action movies were all the rage — or better yet, the Seventies when you had The Towering Inferno and the like. In fact, looking at the poster, this kind of does look like another Towering Inferno, doesn’t it? It just seems a little out of place for our superhero-dominated era.

Anyway, it will take me a while to figure out what happened with this latest flop movie, although I notice the autopsy from Forbes is already out.